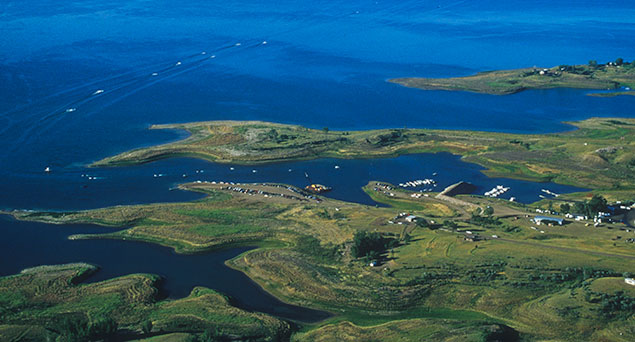 On May 8, 1805, the first “tourists” to this region, the Lewis and Clark Expedition, camped at the confluence of the Milk and Missouri rivers, about 18 miles southeast of present-day Glasgow. Lewis explored the Milk for about three miles and wrote, “The water of this river possessed a peculiar whiteness, being about the colour of a cup of tea admixture of a tablespoon full of milk. From the colour of its water, we called it Milk River.”

Glasgow, in the Milk River Valley, came to be in 1887 as the Great Northern Railroad was pushing its way west. It was originally called Siding 45 … the 45th rail siding west of Minot, N. D. Four or five tents made up the first structures.

A spin of the globe by a blindfolded railroad clerk in Minneapolis determined the town’s name. Stopping the motion, his finger came to rest on Glasgow, Scotland. Hence, the name Glasgow, Montana. Many other eastern Montana railway towns such as Zurich, Malta, Harlem and Hinsdale owe their titles to this unimaginative process.

Originating as a place for the railroad to pick up livestock and grain, Glasgow remained a quiet agricultural community for a long period. In the fall of 1933, its lifestyle changed abruptly as men, desperate for work, jammed into the town to build Fort Peck Dam. Used as the primary trade and transport depot for the dam project, Glasgow was on its way to becoming one of the busiest places in northeast Montana. While most of the workers lived in and around the construction area, many stayed in Glasgow. The project brought in up to 11,000 workers, plus their families. Estimates are that there were 50,000 people in the area during the construction peak.

Adding immensely to local prosperity and growth was the arrival of the Glasgow Air Force Base in the late 1950s, only to have it close in 1969. While the base existed, almost 16,000 people lived between it and Glasgow. Stan Sonsteng of the Glasgow Courier remembers that at 5 p.m. during the low light of winter, he could observe a steady stream of lights on the road leading to the facility from town.

The folks of Glasgow have managed to make a go of it in spite of the ups and downs from the drought and depression of the ‘20s and ‘30s, through the base closure and recent slumps in the agricultural economy. Like much of eastern Montana, this is a place where people have deep roots and love where they live. Today this town of 3,500 people is a regional livestock center and a gateway to the eastern end of the CMR and Fort Peck Lake.

A visit to the Valley County Pioneer Museum gives an insight into the integrity and determination of those who settled and continue to live here.

Leaving Glasgow, it’s about 18 miles to Fort Peck and Fort Peck Lake. With almost 1,600 miles of shoreline, it is the largest body of water in Montana.

Plains Indians once roamed this country following enormous bison herds. The places where they camped along the river, and later the area Lewis and Clark walked, are now well under the waters of Fort Peck Lake.

Fort Peck Dam is one of the largest earth-filled river impediments in the world. Its original purpose was not only to control floods, but also to create jobs in a depression-saddled economy. Completed in 1940, at the time, the undertaking was the nation’s largest public works project.

The work spawned shanty boomtowns that were scattered around the development area - Square Deal, New Deal, Park Grove, Delano Heights and Wheeler. These places disappeared almost as quickly as they grew. Some, including New Deal, are now covered by deep waters of the lake. Today, all that’s left of any of them, except for Fort Peck, is the rebuilt Buckhorn Bar; the original burned down in 1983.

With the commencement of the dam project, the orderly development of the Fort Peck town site, planned and built by the Army Corps of Engineers to house its employees, began in the fall of 1933. A neat and tidy community, it invites you to stay in the 1930-style Fort Peck Hotel (the rooms were remodeled in 1993), visit the Fort Peck Interpretive Center and Museum to view its collection of Indian artifacts and fossils uncovered during the construction of the dam, and if you’re there between June and September, be sure to attend the Fort Peck Summer Theatre. Built in 1934 as a movie house for the dam workers, it was kept open 24 hours a day to entertain the round the clock work shifts.

Fort Peck Lake is treasured for its size and outdoor opportunities. Six recreation areas within a few miles of the dam provide access for water sports, fishing and hunting. The Montana Governor’s Cup Walleye Fishing Tournament is a nationally recognized event held the second weekend in July.

Fort Peck Lake is surrounded by the eastern unit of the Charles M. Russell National Wildlife Refuge. Roads lead out of Fort Peck and Glasgow to scenic and recreation points on the Lake and Refuge. As most of them are only passable in dry weather, check in with the CMR Field Station in Fort Peck.